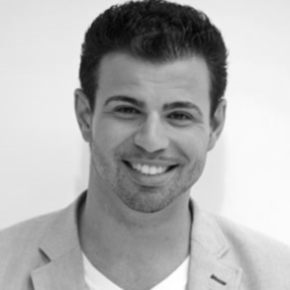 Matthew Tasa was born in Frankfurt, Germany, of American parents.  His father is the solo trumpet player in the Frankfurt Opera Orchestra, hence his musical beginnings, perhaps.  After starting with private piano lessons when he was barely five years old, he started to write his own songs and had his first recording studio experiences at age 13. At age 15 he began with vocal coaching which was a turning point for him, when he decided to strive to become a successful singer and songwriter.  That same year, he had his first CD release.
1998 he auditioned for Berklee School of Music in Boston and was accepted, but just a few months later decided to defer his attendance and signed a contract with BMG/RCA and his group “Fusion”. Their first single “China in Your Hand” (which Matthew co-wrote) was released in 1999 selling over 100.000 copies and reaching the Top 30 of the German Media Control Charts.  The group’s second single, “You Make Me Feel” was also co-written by Matthew in cooperation with Roberto “GEO” Rosan, the producer of the very successful group, “Sweet Box” as were eight of the twelve songs on Fusion’s album, “InFusion One.”
When “Fusion” disbanded in 2000, Matthew hooked up with the producer Torsten Stenzel (Sakin & Friends, Tarja Turnen, Moby, High 5) and together with the popular Swiss DJ Tatana, he had many successful hits on the Swiss Hit Parade.  “More Than Words” was the official Hymn of the Street Parade 1999 in Switzerland. This was followed by a Gold award for the Top 10 Tatana Hit “Words” (2002), and then the Top 20 Hit, “Moments” in 2003.  “Words” and “Moments” .
By 2006, Matthew was well on his way to becoming a promising songwriting talent.  His songs have received honorable mention in the ISC songwriting competitions including a track entitled “Inhale, Exhale”, which reached the finals of the ISC songwriting competition, 2007.
That same year Matthew and his business Partner founded STEREO MINDS – a songwriting and production firm based in downtown Frankfurt that same year.
The songwriting-duo quickly enjoyed their first success together, as their track „Drive So Far“ became the second release for EMI’s boy group PartSix (www.partsix.de) reaching the top 50 German charts.
Between 2006 and 2009 Matthew received a Gold award for co-written songs on Sir Colin’s album “PPM City”, and an additional Gold award for song-writing contributions to DJ Antoine’s Album “Superhero”.

Finally, in 2009, Matthew received the greatest opportunity of his young career when he co-wrote several songs on German mega-star Xavier Naidoo’s Album release entitled “Alles Kann Besser Werden” – (Media Control Chart) Nr. 1 Album, including the first single off that album with the same title and the third single “Bitte Hör’ Nicht Auf Zu Träumen”.
2011 he then co-wrote three songs for German Idol Winner 2010, Mehrzad Marashi’s Album “Change Up”, together with David Voigt of the BeatGees and Ingemar Aberg from Sweden.
Drawing on a range of music business influences in singing and songwriting from such artists as Kenny “Babyface” Edmonds, the movement-defining Frankie Knuckles, the hip-hop-producing power of Timbaland and the smooth vocals of Lionel Richie, Matthew packs a potent musical punch that transcends across multiple genres and eras.

“I’m not trying to plant my musical roots, rather I am poised to grow from them into something meaningful, influential and inspiring.”